Private Lake for residents & members only

We love Tench A pool stocked with just “Tench”! Ranging from 2lb to 7lbish with of course a few off springs, this is a lovely addition to the pools. Tench are one of our favourite fish, so we dedicated a pool in their honour. Great access, 10 easy pegs to get to, the tench pool has been around since late 2013 and is proving to be quite a catch for those wanting something completely different.

This is a members and residents pool. Membership details can be found on line and start from as little as £40 for senior members. There will be no day tickets on this pool.

Its located privately and discretely between the Farmer Jack and the Moby Dick lakes with a small stream running adjacent to it. With 8 comfortable concrete platform pegs all anglers will be able to enjoy this special and beautiful species of fish. The size of the fish will vary as they possibily the most expensive type of fish to buy & stock. One can spend £15 a lb in some cases. We intend in time to have some real clonkers stocked to get tongues wagging in the bar with a large head of tench that will grow on and breed.

The Snake has tench over 6lb at the moment, which have grown in the healthy waters but probably a bit big now for that venue.

All the lakes at Docklow have tench in, yet we want a dedicated pool just for this favourite fish Like the Stock Pool did a few years back, when we improved the depth and banks, the full benefit wont be seen until end of 2013 into 2014. But as a wise person once said “you cant make an omelette without breaking a few eggs!…” how true.

Docklow Record has been held since 1995 by Keith Welsby of Sheffield at 7lb. Be good to beat that in time hands down.

We hope you enjoy

Morphology Tench have a stocky, carp-like shape, olive-green skin, darker above and almost golden below. The caudal fin is square in shape. The other fins are distinctly rounded in shape. The mouth is rather narrow and provided at each corner with a very small barbel. Maximum size is 70 cm, though most specimens are very much smaller. The eyes are small and red-orange in colour. Sexual dimorphism is weak, limited to the adult females having a more convex ventral profile when compared with males. Males may also possess a very thick and flattened outer ray to the ventral fins. Males are generally smaller than females but can be recognised by having more curved lower fins and noticeable muscles around the base of the fins generally absent in female. The tench has very small scales, which are deeply imbedded in a thick skin, making it as slippery as an eel Folklore has it that this slime cured any sick fish that rubbed against it, and from this belief arose the name doctor fish 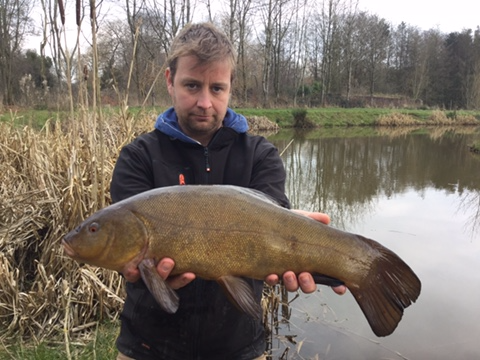